A Variety Of Things That Were Done!

Hi Everybody. Sure. It’s a lazy title given that almost every week I do a variety of coding, designing, animating, and arting… Why is “arting” not a word? Is art supposed to be too metaphysical to be a verb or something? meh. Nevermind that, I need to get on talking about nothing in particular including some non-dev stuff.

Since last week I was being specific and made a long post with a video and some potentially very helpful information, I thought I’d be unhelpful and blog about what I’ve been up to this week since I spent three days tidying my house and doing some DIY.  Basically I took 3 days off to gut a room and build a wall. No! It wasn’t for keeping the immigrants out. It was just a partition to give my kids their own space without technically forcing them into their own rooms. Also unlike ‘that wall’ there was good support for it and it got built on schedule. Furthermore, you can’t just climb over it with a ladder, as there is a roof in the way. 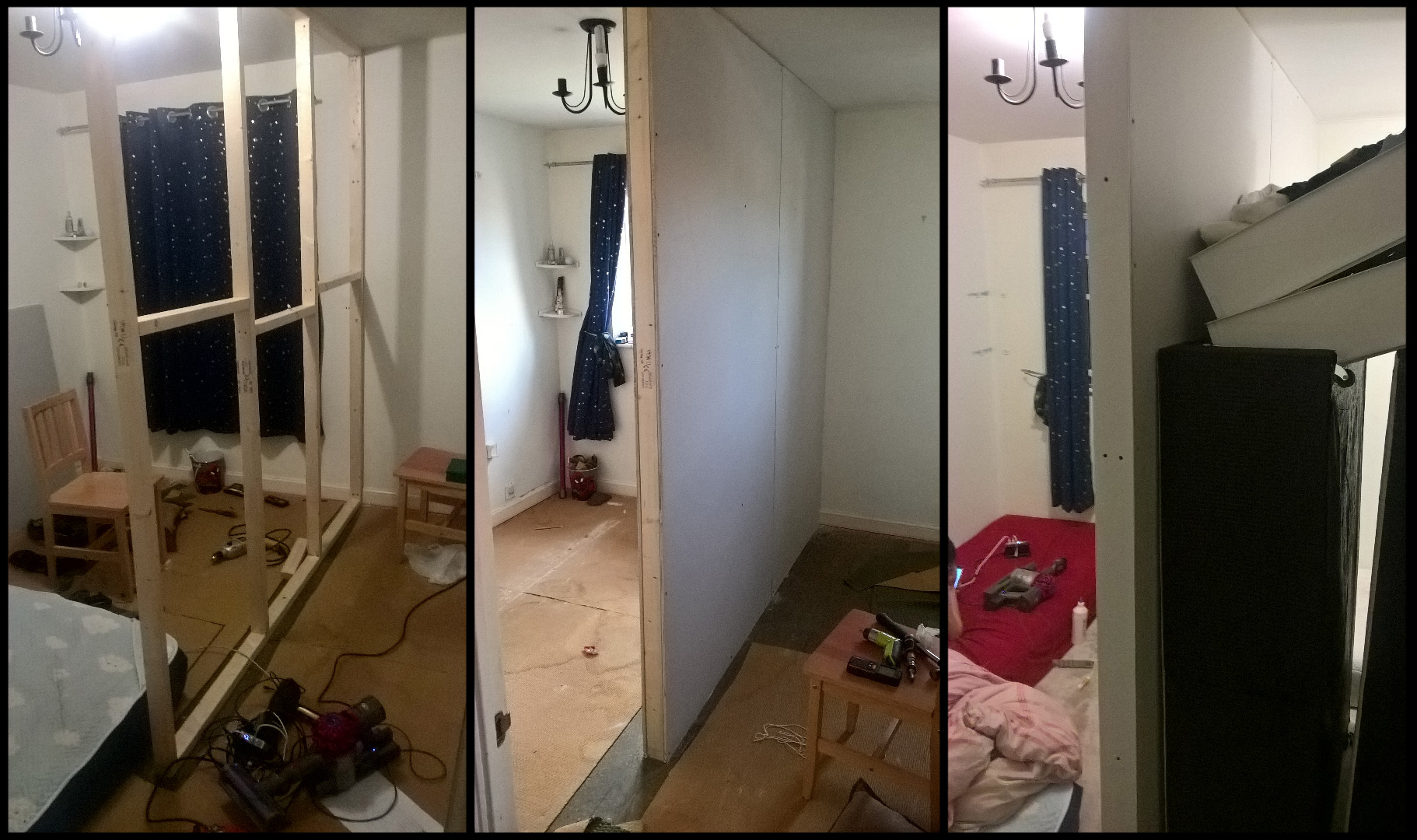 How to build a wall in 3 easy steps. The easy steps are not the 3 images seen here. The easy steps are. Plan and measure carefully, do your research on the internet, then decide if you can do it or need to get someone else in and pay them a huge some of money because it’s really expensive. Too expensive for me obviously because I had to build it myself.  As you’d guess, the part that takes the longest is tidying and clearing the damn room in the first place.

Moving swiftly on.. As soon as I typed that I realized I’d also tidied that I’d also started tidying the office and finally got round to taking down the infamous Taylor Swift wall montage/stalker shrine. Even though Chantelle hasn’t been here for months I’m pretty sure she would have still felt it being taken down from afar and will be sending me a strongly worded letter. 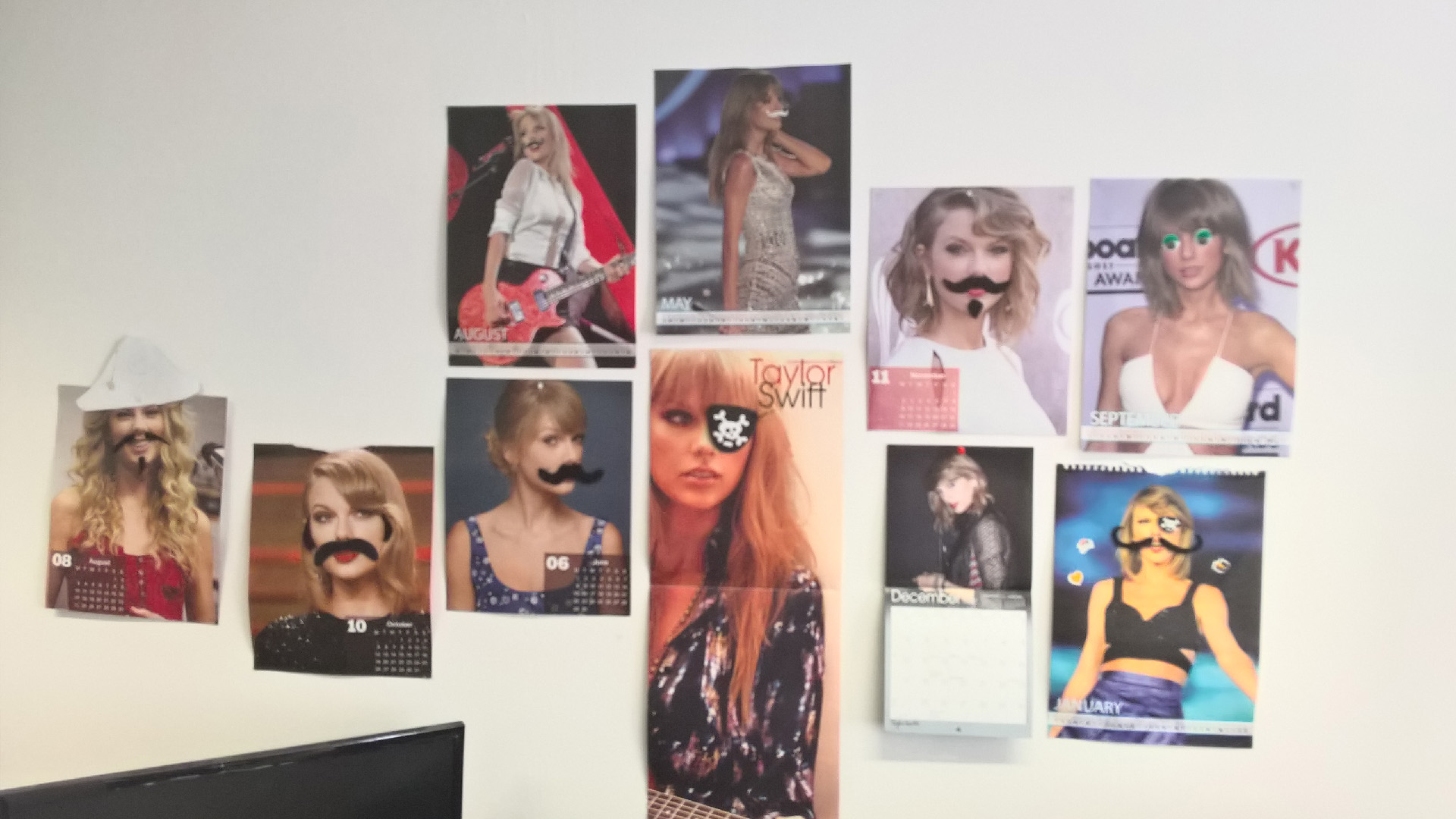 I do want to stress that while I mentioned I did some tidying. I did not by any stretched of the imagination get the office actually tidy, just a little less messy.

Let’s move on to something more game related and talk about Ben’s endeavors in the art world. Ben has made a nice space ship that is stylistically quite different from the original one, being half way between the U.S.S Enterprise, and a space car from the Jetsons. I’ll pop a picture below showing the new ship exterior and interior, compared the the first pass standard ship. 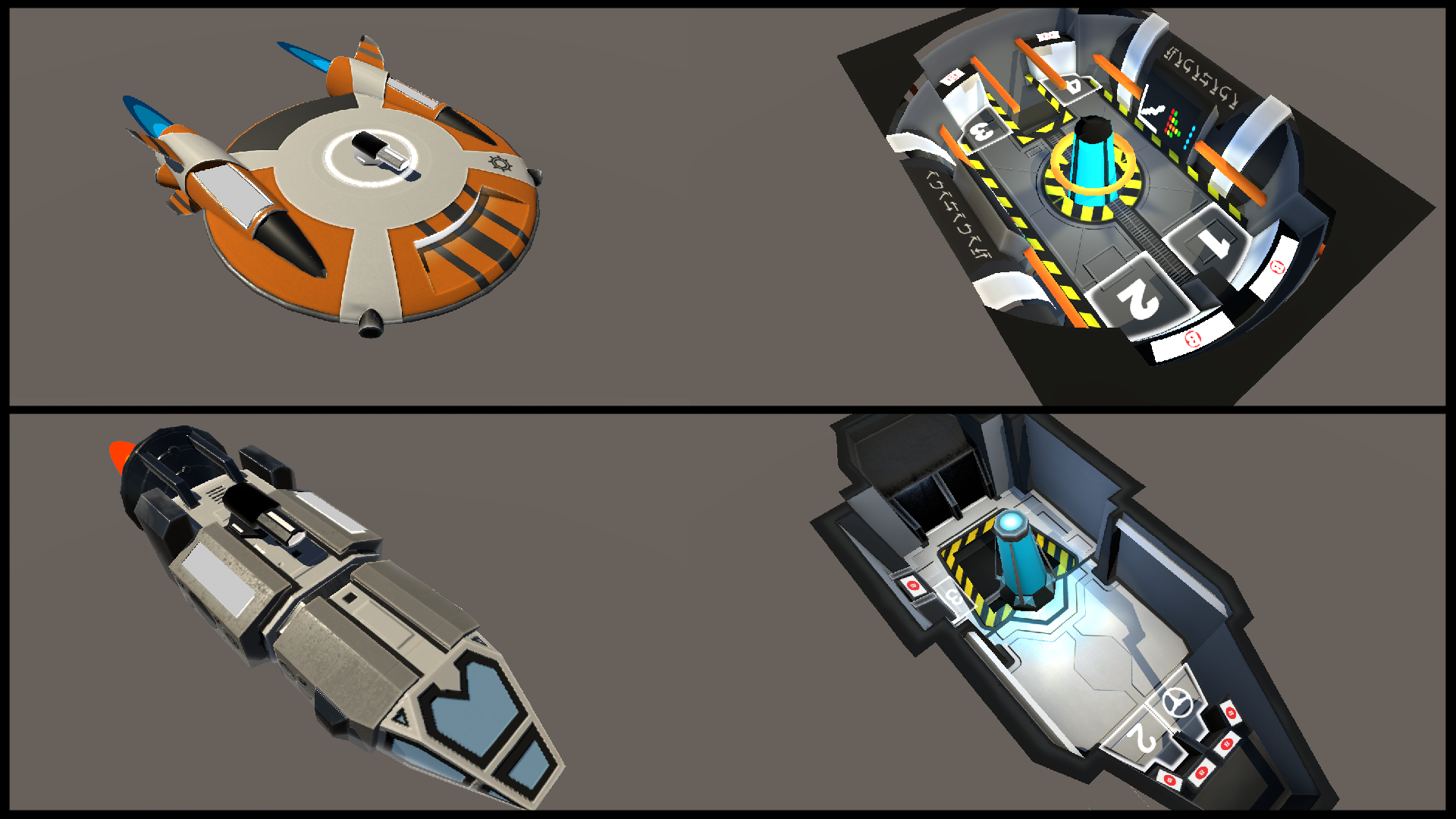 Yes. It is orange, and no, I don’t know why he made it orange. It still has sections that change to the team color so it gets some ‘interesting’ colour combos going on. It’s quite nice though. Ben still struggles with various things as you’d expect, such as sticking to any kind of reasonable poly count, and learning to use the tools for a job rather than complaining that the metaphorical hammer does not screw in the metaphorical screw.  He also has a keen interest in detail which can get in the way of finishing the job, as he likes to put detail in places where it will literally never been seen except in screen grabs like this. Still, he’s getting there and I look forward to seeing his continued improvement. He on the other hand, looks forward to me taking a look at it in game and finding out why it explodes as soon as its paint gets scratched. My guess would be the cheap Italian bodywork, but I suppose it could be an incorrect data value or code bug. I’m not as fussed about that right now since I have other stuff to do, and he’s going to have to change some things with both the interior and exterior anyway to accommodate a few features that aren’t in the game yet. By that time I’m hoping he will have gained the skill to manage his polycounts a bit better too.

I’ve been working on making the basic characters for the game. I’m on their second iteration now and still haven’t decided how far along the stylized route I want to take them. Originally they had no feet but even when tiny, feet help to make a moving character more readable. I do want to still keep them low polygon though: hundreds rather than thousands of polys, so fingers and all the muscle definition of base male and female models has to go. I’ll probably talk about it a bit more next week. The last thing I have been involved with is my ongoing battle to sort out my end of year taxes. Business paperwork is something I truly despise doing, so I will not be talking about it in more detail next week, or at any time. In fact I’m pretty sure that the only time I will mention it is to complain about how much I dislike doing it.