A Motion For Compromise!

You might be surprised to find out that the title above has absolutely nothing to do with either Brexit, nor the left right split in american social politics.  You only thought that because it’s practically all you hear about on the news at the moment. No. This is about animation, and the choices made that affect how it’s done for a game like this. Animation is far more important than many people think, even designers. It’s less important than most animators think of course, but that is because most people think what they do is the important bit of any creative endeavor. As a designer I obviously know for certain that design is the only thing that really matters!

Back on topic. When creating animations there is a part of you that wants to make it super personalised, nuanced, and full of little details that capture the character. you want to take the time to add some extra weight and bounce to a character, and have nice long animations with some flourish and even comedy. Well sure, for cutscenes, extended idles, and products with a huge budget, that’s a great idea. When you are a tiny company you should avoid animation altogether unless that’s all your doing because it’s a stupid idea to get involved in complex character animation unless that’s all you are doing. Failing that (Which I did) you have to make animations which don’t interfere with the responsiveness of the character to user input, especially in an action game. This is why even the player character in triple, double, chocolate on top, A games still often have animations that are abrupt and only a few frames long rather than a couple of seconds with the nice telegraphing and execution that you almost always find in the cut scenes.  It’s a challenge to get the balance right… and I am making it easier for myself by having the character tiny on the screen, and also top down so you usually don’t see a lot of the motion.

Which his why I made him run with his arms quite far out to the side. Any runner worth their lap time will tell you that for efficiency you should tuck those albows in and keep the hands close into the body, but that wouldn’t look very obvious when the character is very small, and viewed from the top, so I compromise. OK. If you were in earshot and reading this blog, I might hear you shout “Foolish mortal! Thou createth animations by the score for a world entirely in wondrous three dimensions. Why hast thou not simply moved the camera to an isometric perspective to sate thy visual  desires?” And the answer is gameplay. This diagram may or may not make the concept obvious to you. 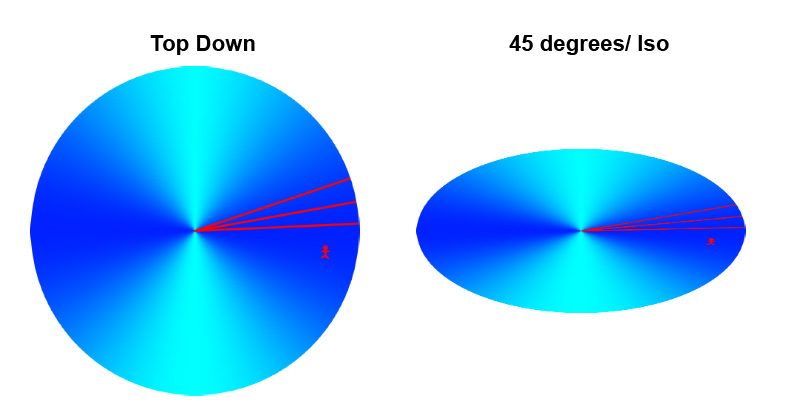 I’ll explain. From top down all directions are completely equal whilst aiming, and you have almost complete certainty of the direction something is relative to your character, but in 3D, once you tilt the camera, the left and right arcs, for want of a better term, become squashed. This makes it harder to aim in those directions. You can mitigate this with a little auto aim, an arcade style that means you are constantly shooting, or a laser sight that shows you where you are pointing, but it still isn’t quite the same as top down. I could also just cheat and warp the graphics like all the old 2D games did, but then if I decide later to change the camera angle even a little, the world would be populated by hideous mutants. I think I’ll just leave it as is, and test out players with a laser sight a little later. the animations are done to function ok from most angles so it’ll be fine I’m sure.  Except the original strafe anim which was a terrible fail, because from the side with no perspective it just looked like the guy really needed a pee.

there are also lots of other little compromises that I made, such as the general posture for holding the gun. If you look at the image below you can see what I mean. From a purely mechanical point of view, the ideal situation is the gun sticking right out the front in the center. This way we can easily identify the gun, which way it’s facing, and have a clear idea of its position upon the rotation of the character. That looks crap though. It’s not how people do, or should hold weapons, but if we hold the weapon more realistically then the firing line, whilst perfect from the shooters point of view (in line with his eye, through his center of gravity, and the recoil supported perfectly through his body and straight into the planted back foot), it’s awkward for gameplay as the gun is off center from the rotation axis, and more of the gun is obscured. So the solution is do fudge it a little to try and get an ideal compromise which is near enough center line and near enough realistic. It’s like jpeg compression. You’d rather not do it but unless it’s done badly, no one will ever notice. 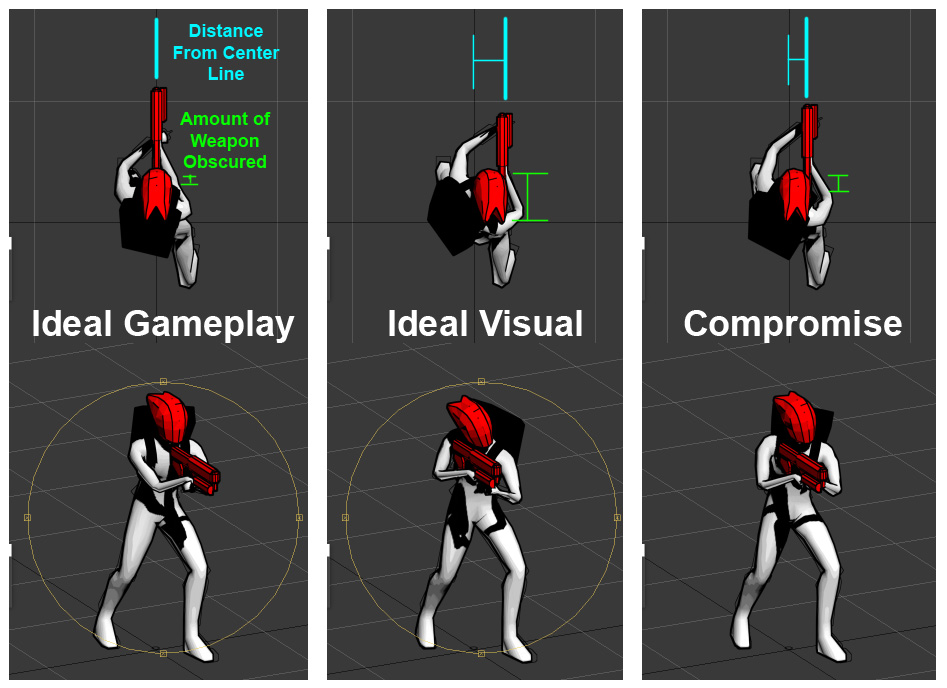 For your bemusement, here is a top down view of the basic anim set, including the prop always being in the hand whether it should be or not, and many overly animations just being left on the body so they also don’t make sense. I didn’t even label what was what what so you just have to guess.

There are a couple more animations that go at the end of this sequence, but the animation sequence already has too many spoilers in it if you can figure out what they are and I really didn’t want to give too much away. So I’m done for now. You can go now, but feel free to social media if that’s a thing you do. We’re on Twitter, Facebook, and Youtube Bye for now.