Yeah. I wen’t to Gamebridge.  (which according to facebook has related page “Jeremy Corbyn). Anyway, Gamebridge is where all the cool kids hang out, and some of them even talked to me. I had mostly been fixing bugs that week, but while I was doing that, Ben replaced my perfectly good cube and number picture, with some kind of high tech projector thingy and a real time model of whichever battle arena you currently have selected. See the gif above. Isn’t that fancy? Yes! The answer is yes, it’s very fancy. Admittedly, almost nobody tried out the different levels as they were all having too much fun on the starting arena. They did push the button and go “Oooo” but only one group actually went into the black hole level… that was followed by panic, and screaming, and death. So they didn’t make that mistake again. A lot of people did have fun just messing around in the menu. Definitely more fun than they should have had but I imagine alcohol played a role.

Gamebridge is always very useful and lot’s of fun. MY biggest complaint is that I never get to try out all the games or talk to everyone I want to. If that is the biggest problem the event has then it must be a pretty darn good one right? It is, so many thank to the Bruce and Ollie for organizing it as always. It’s very much appreciated by everyone. I always benefit from user feedback at the event also. This time I was giving some serious thought to my discussion with Andreas from Nosebleed interactive. He’ll be pleased to know that after some consideration and testing, I’d doubled the turning speed of the main craft, increased the maneuvering thruster power by a third, and will be adding an impulse to the engine after I get back to coding in a week or two.  I’ve even thought about how I can add some training wheels for new players without doing anything involving icky icky text.

The other main thing I did was code so that you could go on any ship and turn off any ship and bla bla any combination of colour and team numbers works fine now, so you just can’t do it wrong.

After that was out of the way I had to finalize what was going to be on the main ship, and by extension, the things that have to be on all ships going forward. 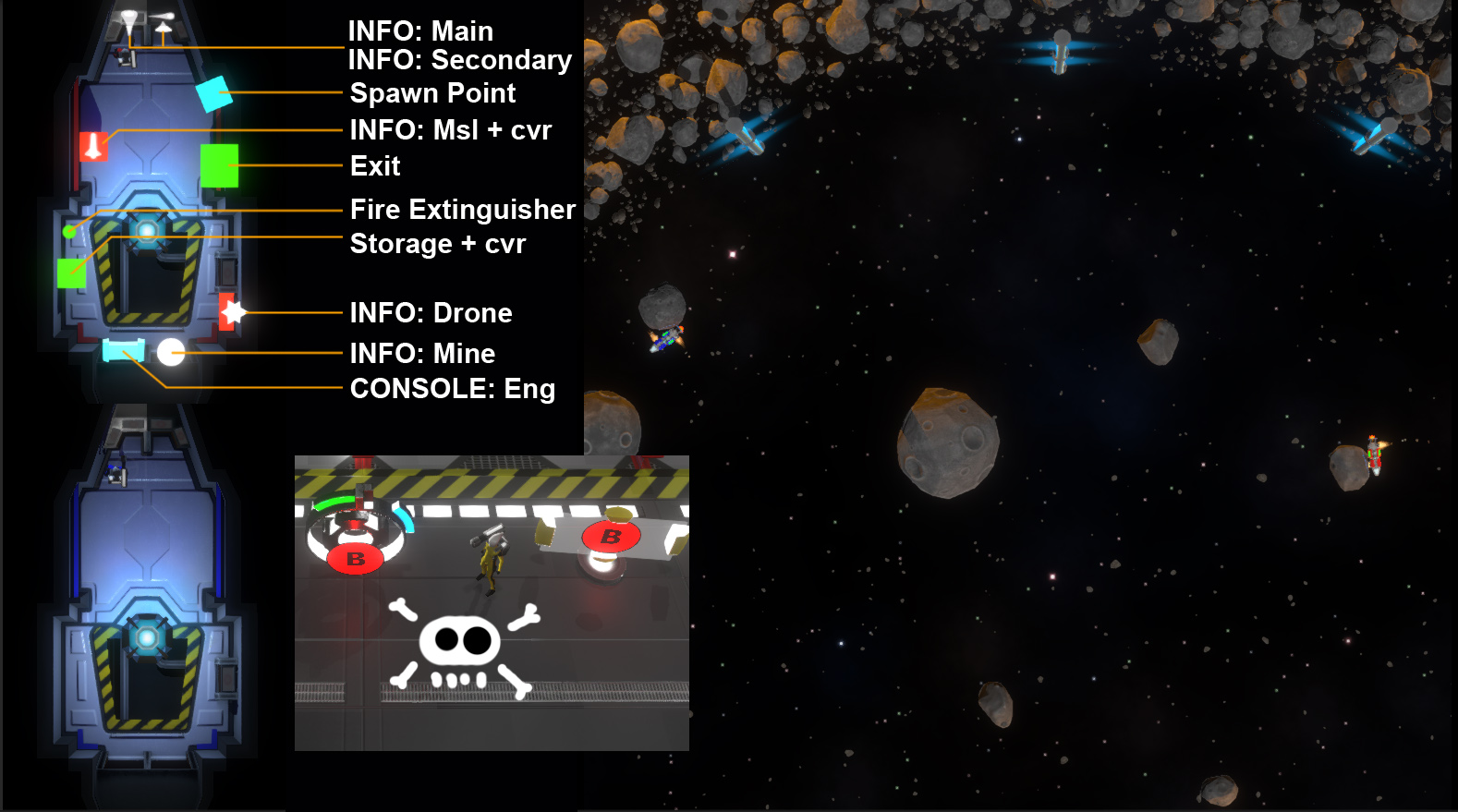 As you can tell from the high quality glowing bits, the art has not been done yet, but at least it’s on a todo list now.  I left everything else deliberately vague so that I can deny all knowledge of a feature that seems like it might be listed here but doesn’t make it into the final game. Doing what I want is going to involve a few extra systems that don’t exist yet, but I think it’ll be worth it and hopefully won’t kill me. That image at the bottom is a skull by the way. See this little guy here…

Well it’s time to say goodbye to him and his gigantic shoulder cannon, buzzing around like a bee in a bottle. His replacement is similar but more polished, but I won’t go into that today. Just say goodbye and move on, much like you should do with this blog post now… although do feel free to do the  Twitter, Facebook, and Youtube thing. I’ve heard it was all the rage ten years ago. Bye for now.